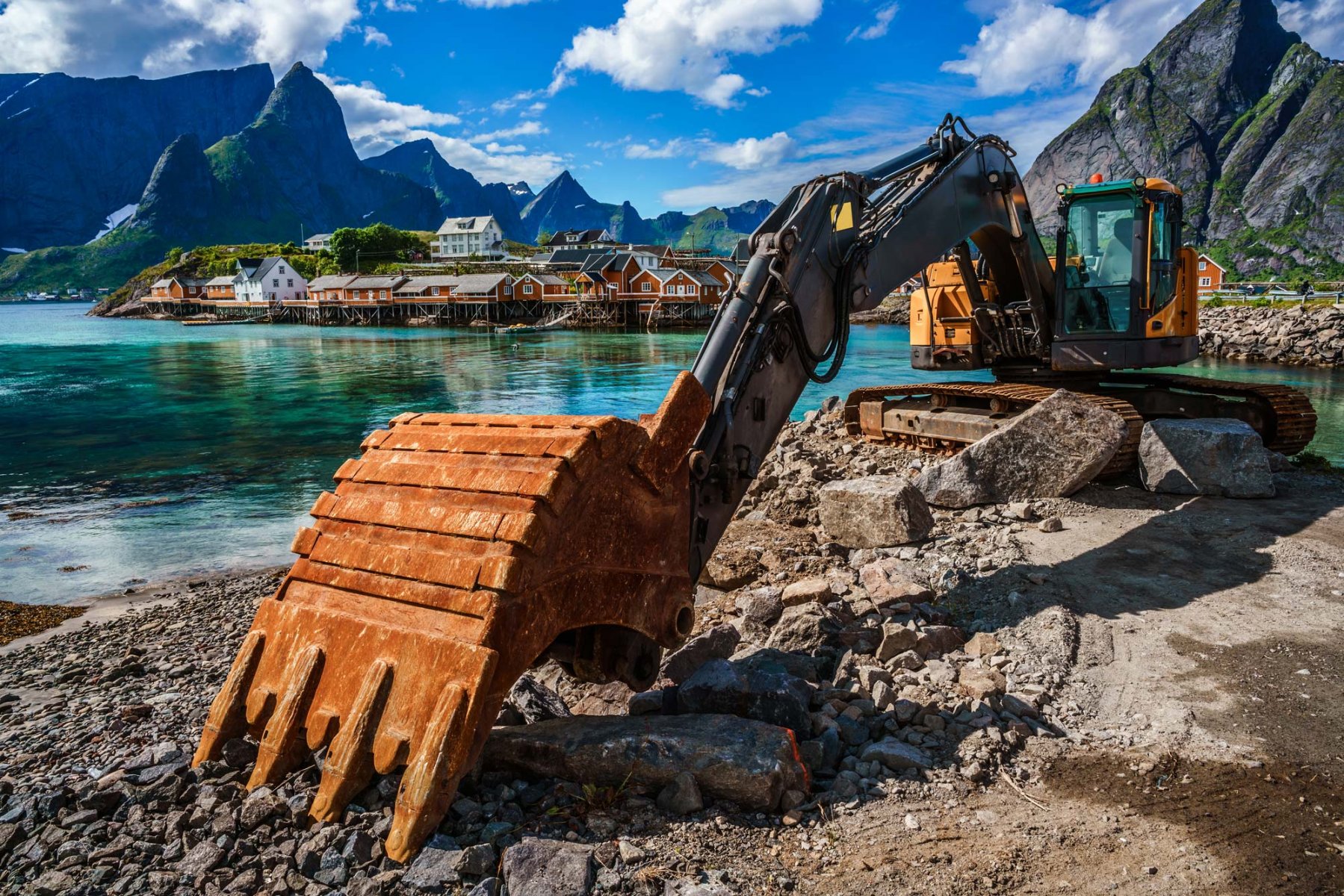 Chances are you are not coming across ‘excavator’ for the first time, whether you are an enthusiast or a regular in the construction business. There is a lot to know about this efficient and multipurpose heavy equipment.

What is an excavator?

What are the components of an excavator?

There are three main parts of an excavator – the bucket, the dipper or stick, and the boom. All these parts are linked to a cab, positioned on a rotating house capable of making a complete 360-degree turn. Sometimes, they are fitted with wheels or tracks, depending on the intended project or the excavator’s model and manufacturer.

You will find excavators in different weights and sizes. The largest models weigh up to 180,000 lbs. Depending on the project’s nature, the bucket can be replaced with other attachments like rake, ripper, drill, or auger to achieve different results.

How do you choose the right excavator for a project?

What is the difference between cable and hydraulic excavators?

What are the various kinds of excavators?

Excavators come in different sizes and build. So, they are suitable for every construction project, either major constructions or simple renovations. Considering their flexibility, it is easy to combine them with different attachments, depending on the nature of the earth-moving project.

An excavator running at the maximum capacity will increase efficiency and speed up the project. European urban projects tend to prefer wheeled excavators because the wheels are friendlier with finished roads and pavement, whereas traditional metal tracks are not.

Let’s take a look at the seven main types of excavators currently available:

Crawler excavators are mostly preferred for landscape grading, trench digging, and mining. It is the traditional representative of ‘excavator,’ and comes in both the track and wheels models.

Mini excavators or mini diggers are almost like the crawler excavators, but they are smaller and compact. They are designed for use on delicate terrains or narrow and obstacle-filled job sites. They have no tail-wing capability, so they can only handle basic projects.

As the name suggests, long reach excavators have very long arms – up to 100 feet. These extended attachments make them suitable for industrial demo and heavy-duty digging projects.

This kind of excavator comprises buckets designed to scoop away dirt and operated from the equipment cab. Considering their small size, skid steer excavators are ideal for simple clearing tasks and residential projects.

They are almost like the regular excavators, except that they are not fitted on tracks but on wheels. They are most preferred for city projects – the main reason for their increasing popularity.

Suction excavators are efficient in clearing dirt, debris, and soil; hence, they are most preferred for complicated excavation projects like debris cleanup and underground applications. The high-pressure vacuum and water jet on this type of excavator are operated from a wheeled vehicle.

In addition to its larger size, dragline excavators rely on a dragline system and a hoist rope to clear the earth. They come handy in road excavations, pile driving, and underwater projects.

What are the popular excavator attachments?

A bucket is one of the most common excavator attachments. It is found in all traditional excavators, where it digs towards the cab and machine. Lifting and moving the digging bucket is easy since it is fitted with a thumb.

Other attachments include hammers, auger attachments, rakes, compactors, and rippers, among others. The auger attachment helps to dig holes, while the hammer comes handy in breaking rocks and hardened concrete. With all these various attachments, it is understandable why excavators have found important diverse applications.

How are excavators manufactured?

Considering today’s popularity of excavators, the manufacturing is not limited to only one brand. Different companies are making various sizes and models of excavators for all kinds and sizes of projects.

Let’s take a look at some of the top excavator manufacturers in the business:

Since its establishment in 1925 by the amalgamation of Holt Manufacturing Company and C. L. Best Tractor Company, Caterpillar (CAT) has grown into one of the largest and most trusted manufacturers of heavy equipment and machinery.

The first Caterpillar Excavator Series is called the 20o series, introduced in 1972. This has continued to evolve. At the moment, it boasts contemporary excavators with fuel-efficient engines, state-of-the-art tech, and productivity-centered designs.

You will find a wide range of aftermarket Caterpillar cat parts at Kep services UK.

Volvo started in 1832 in the Swedish city of Eskilstuna, with the foundations laid by Johan Theofron Munktell. Joan, a 27-year-old construction engineer, was commissioned by the city to build an engineering workshop to improve the area’s local mechanical industry. Three years after the inception of the workshop, Joan manufactured the first locomotive in Sweden.

Somewhere else in Sweden, Carl Gherard and Jean Bolinder have just returned from overseas (England) after completing their tertiary education. Both majored in engineering technology and wanted to pursue their interests in the same.

About a century later, Johan’s pioneer mechanic workshop was merged with the Swedish brothers’ business. AB Bolinder-Munktell was the result of the merger. Volvo eventually purchased the company in 1950.

Volvo is currently a respected front-runner in the construction equipment manufacturing business. There are plans in the pipeline for the company to launch a range of electric compact excavators and wheel loaders before the end of 2020.

Volvo provides a wide range of excavators – mini, short swing, wheeled, and crawler excavators. The most popular models are the wheeled excavators, with excellent compatibility with different attachments and stability levels. There are also medium, and compact Volvo wheeled excavators.

After its launch in Japan in 1917, Komatsu extended its tentacles to North America in the 1960s. They launched their H-series into the American hydraulic excavators’ market before their official launch in 1970.

Komatsu has a wide range of excavators to its name, including mining, compact, and small excavators. The Komatsu PC170LC, a mid-range model, has a 121 hp and 2,100 rpm and an operating weight of over 43,000 lbs. Another notable Komatsu excavator model is the PC240LC-10 Super Long Front, revered for its immense stability and productivity. This model has a 177 hp, 2,000 rpm, and a 58,51 lbs operating weight. Considering its extended working range, it is ideal for sloping applications and digging deep ditches.

The John Deere and Co company was established in 1837 by John Deere. It took quite a long time before the company produced its first excavator – the JD 690 was introduced in 1969. Fast forward to today, John Deere has over 20 various models of excavators to its name.

What are the safety protocols and potential hazards associated with excavators?

Like any other heavy equipment, operating an excavator comes with a safety hazard. This is why only trained individuals are allowed to handle such heavy equipment. A trained heavy equipment operator is expected to be careful and always observe the safety protocols.

Wondering what the safety protocols are? We have highlighted them below:

Again, only personnel trained in operating heavy equipment must use excavators. Do not operate a piece of new machinery except you are well-trained in its operations.

What is the story behind the excavator?

Before the excavator, there was the steam shovel, which can be considered as the ancient replica of the modern excavator. The steam shovel was William Otis’ invention. It was patented in 1839. The first application of steam shovel was on railway tracks where they are fitted to ensure mobility.

Steam shovels are designed to move up to 300cuic yards daily. This is a vast improvement to the 12 cubic yards previously obtained from human labor. Steam shovels were used in building the Panama Canal. They also played crucial roles in the digging of the foundations of the pioneer skyscrapers. It was revamped in the 1920s into a tracked and wheeled equipment, and by 1931, the last railroad shovel was shipped.

Creating the excavator required the coming together of different pieces of equipment. For instance, the hydraulic system, a vital component of the then excavator, was provided by Sir W. G. Armstrong and Co, a notable British Business. The then hydraulic system was manufactured in 1882. It used water instead of fuel.

The patent for the first hydraulic shovel was approved in 1897 and awarded to Kilcore Machine and Co. However, it was built on the design concept of Sir W. G. Armstrong and Co. However, there is a slight downside to these early excavator models – they could not make a full 360-degree rotation.

Modern excavators fixed this issue, although it continued to elude manufacturers until the 1960s. Poclain was a French Company that manufactured the TY45 – the first entirely revolving hydraulic excavator with a hydraulic pump and cylinders.

What is the deepest an excavator can dig?

The size of the excavator determines how deep it can dig. Regular excavators will not go as deep as long-reach excavator models.

Is it possible to lift a shipping container with an excavator?

Lifting is not the ideal role of an excavator. However, the right sized excavator can lift or move a shipping container on site. It is essential to know the container’s weight and size so that the right excavator is chosen for the job.

When lifting a shipping container high enough to load into something, work with an excavator whose weight and center of gravity is enough to handle the load. Using an excavator or any other earth-moving equipment to lift a load outside its rated capacity is dangerous.

What is the correct digging position for an excavator?

A few factors will determine the right position for digging using an excavator. These include the dig site’s location, the terrain, the nature of the job, and the excavator’s size.

When preparing for a digging job, ensure adequate planning. Know the right place for all the materials, including the scoop pile. This will keep the dig safe once the excavator has started working.

You should also check the site plans to see any underground hazards like pipes and wires that may cause issues. If possible, draw lines to align and direct the digging process. These measures will safeguard the excavator, the operator, and the materials on site.

Is it possible to use an excavator as a crane?

An excavator is not built for lifting. Hence, using it to lift objects put both the operator and the equipment at significant risk. In rare cases where excavators are used as a crane for lifting equipment, it should be done by well-trained operators, while ensuring great care in the process.

Is an excavator the same with a backhoe?

The excavator can make a full 360-degree turn, while the backhoe is limited to a 200-degree rotation radius.

The versatility of backhoes is another distinguishing factor. They can dig, load, lift, move, and push – all made possible by their wheeled nature. Excavators are built to lift large objects, dig grounds, demolish, and landscape. Excavators are usually tracked, although more wheeled excavators are surfacing.

Can I rent an excavator for a project?

Yes, you can. Like other heavy equipment, Excavators are expensive to own, except when they are needed for long-term purposes. A standard heavy equipment rental company has different sized excavators available for rent.

You can rent for different durations – a day, a week, moths, or your project’s exact duration. The duration of rent and the size of the rented excavator determine the cost.