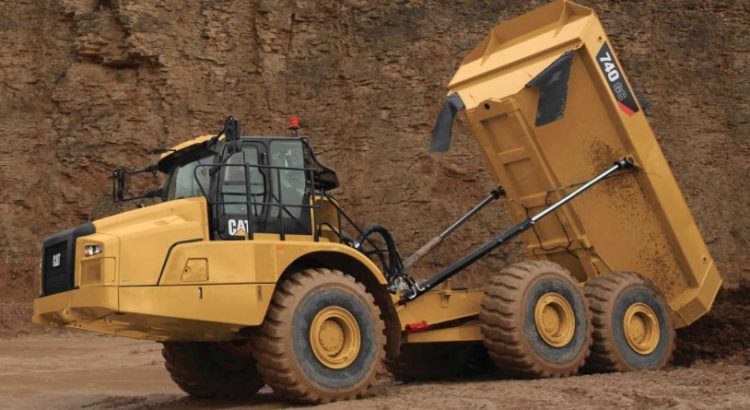 The original makers of rock trucks thought it would be suitable for moving large amounts of heavy materials, especially on a job site or off it. Perhaps, this is why they also call it an articulated dump truck, dump hauler, or articulated hauler. They move conveniently on rough terrains – another reason they are considered excellent transport machines.

What is a Rock Truck?

Also known as the articulated dump truck (ADT), there are two main parts of a rock truck. There is the trailer or back hauler part and the front tractor part, both joined by hydraulic cylinders. The connection means the back part can move horizontally relative to the front part, giving the trailer the ability to reach and dump materials in tight areas.

Articulated dump trucks are mostly used on ongoing construction sites or unsmooth surfaces. However, it is suitable for moving transport materials on city roads. They are available in different payloads, usually between 2.5 and 4.5 tons.

How best to use an articulated dump truck?

The three main uses of articulated dumps are hauling, moving, and dumping materials like debris, soil, rocks, and other construction materials. However, it also comes handy as a water hauler in some cases by replacing the dump with a water tank. So, if you want to move water into a construction site to reduce dust during dry days or summertime, your rock truck will deliver.

What is the ideal articulated dump truck payload?

There is no ideal payload – what determines the payload is the load weight to be hauled or moved. That being said, there are different categories of rock trucks, depending on their hauling ability and payload capacity. The sizes are usually relative to the maximum payload capacity.

Who are the current top manufacturers of rock and articulated dump trucks?

The big names in the articulated dump manufacturing business include Terex, Caterpillar, and Volvo.

The amalgamation of C. L. Best Tractor Company and Holt Manufacturing Company in 1925 gave birth to Caterpillar, although Benjamin Holt has conceptualized the brand name before then.

Having invented the continual tracked system, Holt went ahead to name it ““caterpillar”” due to its crawling movement. He transitioned the name into his merger with C. L. Best, and ““Caterpillar – CAT”” was adopted as its name.

Caterpillar, over the years, has built a sterling reputation in the heavy equipment and machinery business. It boasts 110 manufacturing facilities across the world. CAT has 24 different vehicle types to its name.

Terex Corporation comprises four companies under it – Demag, Powerscreen, Genie, and Terex. This global corporation is mainly invested in heavy equipment and lifts, including the rock truck manufactured under Terex’s brand name.

The first Terex truck was an off-road dump truck invented in 1934. While this differs slightly from the articulated dump truck, the invention was the driving force behind Terex’s establishment. General Motors rebranded their earth-moving division of manufacturing in 1968 as Terex.

In 1832, Johan Theofron Munktell of Eskilstuna, Sweden, came up with an establishment that later evolved into Volvo Construction Equipment. The city also housed its first engineering workshop, and about 21 years later (1853), Johan came up with the first locomotive from Sweden.

During this period, Carl Gherard and Jean Bolinder also returned to Sweden after studying engineering technology for years in England. These two brothers created an engineering company that later merged with Johan’ sJohan’s engineering workshop, 100 years later. The merger led to the creation of AB Bolinder-Munktell.

There are currently seven various articulated dump trucks from Volvo, with payload capacity ranging from 27.6 to 60.6 tons.

There are several rock truck models out there. Decluttering can be quite stressful, but you can work with our list of recommendations below;

The CAT 740 GC is a considerable improvement to the older models of CAT ADTs. With a 40-ton payload capacity, better controls, fuel-saving ECO mode, and hoist-assist system, there are several reasons to consider this upgrade. It also comes with the newest automatic retarder-control system that maximizes efficiency like never before. The CAT C15 ACERT 425-horsepower engine powers the CAT 740 GC. You can never go wrong with the CAT 740 GC.

The impressive traction, coupled with an independent front suspension, makes the TA300 one of the most productive ADTs you can get out there. It is built to withstand the most challenging applications while delivering a high level of performance. It is suitable for a wide range of infrastructural development and commercial construction projects.

The fuel-efficient 370-horsepower engine in the TA300 compliments the 31-ton max payload perfectly to deliver a strong and reliable performance.

The lighter and smaller frame of the Volvo ADT makes it more mobile than the traditional 45-ton Volvo ADT truck. A 469-horsepower Volvo D16 engine powers it – another reason for the lower cost per ton compared to the older models.

The Volvo A45G is designed for use on steep slopes, thanks to the newly-added Hill Assist. There is also a Dump Support System that helps project the truck’s side inclination percentage to the operator. This ensures safer and more productive use of the truck for dumping.

You can expect a long-life and comprehensive performance from this fuel-efficient Volvo ADT.

What safety and hazard protocols should you observe for ADTs and Rock Trucks?

Operating rock trucks and ADTs come with a few hazards. Hence, operators need to undergo adequate training before using the trucks. The first step is to assess the worksite and ensure the load is in place before moving the materials.

Let’s take a look at some of these hazards:

The visibility in dump trucks is lower, considering their large size and heavyweight. This also means there are more blind spots than usual. So, it is important to check all blind spots and reverse them with the aid of spotters. Do not take corners while speeding and indicate reverse motion with visual and audio signals.

Falls and slips resulting from climbing out and into the truck

The safest method of climbing into and out of a truck is the three-point contact. This method requires placing three limbs on the equipment when climbing the ladders. The three limbs could be two feet and one hand or two hands and one foot. You may need to be extra careful during harsh weather conditions – ice, snow, or mud – to avoid slipping. Do not operate a seatbelt without fastening your seatbelt.

Dumping on an uneven terrain

Both the center of gravity and weight distribution are affected when you dump on uneven ground. In some cases, the articulated dump truck may tip over. To prevent this, know how much weight the dump box contains and work with it during operations.

When Ernest Doe, a farmer in Essex, England combined two Fordson tractors in the 1950s, he had no idea he was laying the foundation for the first-ever truck. Doe detached the tractors’ front axles and connected them – the front end to the back end. The connection of this double powered tractor was perfected with a hydraulic turntable. This is why the tractor was called the Doe Dual Drive – Doe Triple D – tractor.

This concept was repeated in 1957 when a Northfield-company designed a hauler capable of making a 180-degree swing with the aid of hydraulic cylinders. However, this innovative design had a shortcoming – it lacks a four-wheel-drive required to make it an actual dump truck.

Volvo fixed this shortcoming by introducing a four-wheel-drive articulated hauler om the DR 631. After its conceptualization in 1966, Volvo pushed the DR 631 into the market in 1968, and that was the start of an influx of various versions of articulated dump from different manufacturers.

A Norwegian company, Moxy, prototyped a 22-ton articulated dump truck in 1970. It came on the heels of the 17-ton D15. Although more ADT models came from the company, they were released under different company names.

The ownership of Moxy exchanged hands, with Komatsu and Doosan taking over at different times. Doosan is a popular name in the truck manufacturing business, with over 40 years of impressive participation. Moxy left the scene in 2011, with an impressive record of pumping out several models of these trucks into the market.

The strength, size, and weight capacity of articulated dump trucks have improved over time. We had the 30-ton market for several years until the 40-ton trucks are recently coming up.

There is no difference between an articulated dump truck and a rock truck – they are essentially the same machine type. There are two distinct parts of an ADT – the rear dumping body and the truck cab, with an articulation point joining both units. The rigid dump truck, on the other hand, has a fixed connection. The dump body is the only body, making it a single piece of equipment.

How do you get a rock truck?

Rock Trucks are expensive. However, they are usually available for rent for different durations – a day, week, or month – depending on your schedule.

What do you use an articulated dump truck for?

Articulated Dump Trucks (ADT) are made to transport materials over uneven terrains. These heavy-duty and large equipment are ideal for on-site use, although they are usable on public roads.